REMEMBER THESE FOUR PASSIONS OF SNOWSPORT

The Far West Ski Foundation celebrates its 50th anniversary this year.  It continues to offer individuals and organizations a way to make donations with tax advantages to four principal snowsport missions. These missions range from international competition to support of aspiring junior competitors as well as the recognition of the importance of on-snow rehabilitation techniques and the preservation for educational purposes of museums devoted to snowsport history. All of the FWSF missions have a broad based, long term impact on snowsport and the Foundation provides a way for all skiers to focus their giving on these missions.   Made your 2014 giving plans?  See the ways to contribute at the end of these Foundation paragraphs.

US WOMEN’S SKI JUMPING AND THE FLY GIRLS 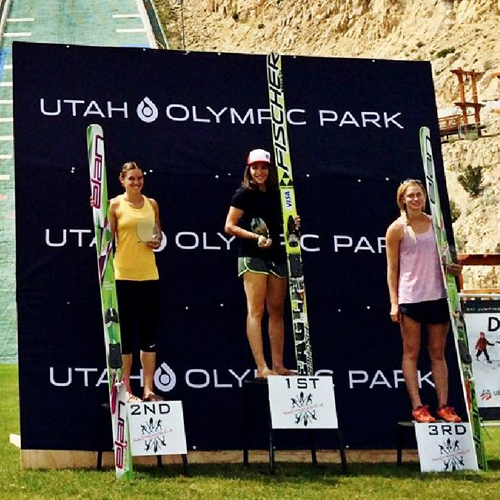 The challenge to our national team for several years to come is to build and rebuild the team after four years of hope, disappointment and – finally – participation in the 2014 Olympics at Sochi, Russia.  Several of our jumpers certainly will be back. Hendrickson, 2013 World Champion, is still rehabilitating from a knee injury last season and elected not compete in the large hill national championship. Lindsey Van, 2009 World Champion, and Abby Hughes did not compete in the large hill national championship as both are still recovering from knee surgeries.

But a new crew is coming up as well and they will be augmented by the Fly Girls.  Nita Englund and Tara Geraghty-Moats placed second and third behind Jessica Jerome who won her 11th national title August 2 on the long hill at Park City Utah.

Fly Girls is a junior team program that feeds athletes into a sustainable pipeline from which the highest-caliber ski jumpers will one day be selected to join the National and Olympic teams. The Fly Girls program kicks-off this summer with a five-week intensive training camp for rising stars in ski jumping ages 12-16. Keep these Fly Girls in mind when you think of supporting our women jumpers: Gabby Armstrong, East Division; Kailey Bickner, Cara Larson, Mollie Immens and Hana Schrock of the Central Division; Samantha Macuga and Sophia Nester of the Intermountain Division; and Logan Sankey of the Rocky Mountain Division. 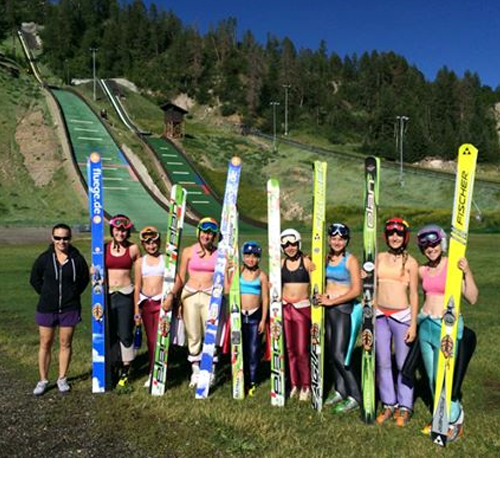 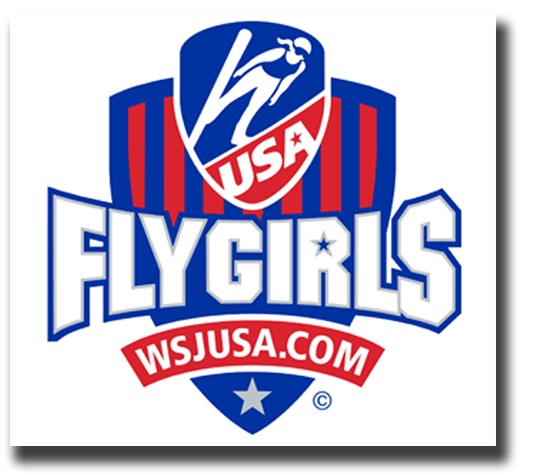 In July 2013, the Foundation raised $2500 for USWSJ exclusively from current and former officials of the Far West Ski Association.  In a Surge to Sochi campaign with the Association, a further $4000 was jointly raised and then granted to USWSJ.  The skiers made their voices heard!  Here is what Whitney Childers said regarding our support: “you and FWSA have been amazing. I dare say the best organizational support we’ve received. This is a great group of people and I will miss them.” Our Far West Foundation target for 2014-2015 is $2500.  We still have a hundred beautiful WSJUSA pins for investors and a used jumpers suit (see below) to start the process.  Contact:  John Watson

Before Whitney moved on to Rally Me ([email protected]), she introduced the new USWSJ Executive Director Melissa Brooke ([email protected]). Whitney said “after five terrific years working with Women’s Ski Jumping USA, I’m moving on to a new adventure. Thank you for your great coverage of this team and movement over the years. You helped put their story on the worldwide map and your work inspired and informed millions of readers and viewers.”

There is a giant army of disabled skiers and boarders out there and the objective of our and others’ effort is to get them on snow. Remember that the center of disabled is able and the Foundation’s second mission is to enable.  On-snow techniques are now practiced, encouraged or sponsored by most centers for health services, including the medical branches of the US Department of Defense and the Veterans Administration. In addition, almost all ski areas now have an adaptive ski school on site affiliated with Disabled Sports USA.  Wars and operations of our Armed Forces have produced a wave of injured people who now benefit from on-hill rehabilitation, recovery and revitalization.

Our Foundation, acting on behalf of all skiers, made its initial grants, albeit modest to the twin challenges of enabling the disabled – wounded veterans and adaptive ski schools.  Our wounded veterans program was launched in 2012 by Linda Westlund in memory of her father, the late Dave Westlund, a WW II veteran and lifelong skier; our grants for the veterans programs is from the Westlund Fund.  Our grant recipient was the incredible Vail Veterans Program which offers free adult or family programs , both winter and summer.  Participants are invited from the major DoD hospitals and the attendance numbers are exceptional, usually including 40+ children in the family events.  Graduates of the VVP program have even gone back on deployment and have competed in the 2014 Sochi Winter Paralympic Games. 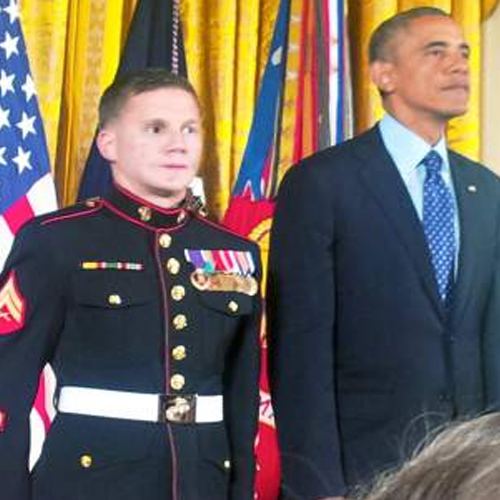 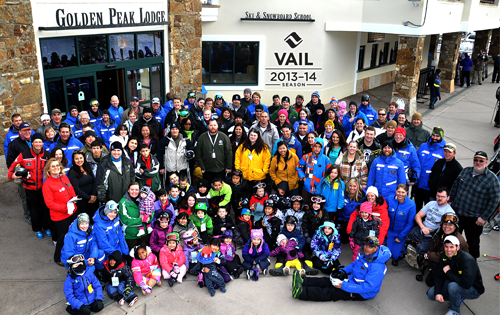 Our key Trustee for what we call mission 2 is the amazing Gloria Raminha and she has raised funds, together with Linda Westlund, Debbie Stewart, Bob and Nancy Ellis, Steve Coxen and Joe Harvis to support mission 2 – adaptive ski schools. Our parallel initial grant was made to the Snowbasin Adaptive Snowsports Education Foundation.  Snowbasin Utah was the site of the FWSA family mini ski week for 2014.

The Foundation annually raises funds to support the Athletic Scholarship Program of the Far West Ski Association.  The Association through its committee is responsible for establishing qualifications, soliciting applications, gathering performance and biographical data and ranking in rough order the applicants for scholarships.  Replacing Dick Shawkey this year as Committee Chairman is David Krupp.  The Committee’s report is separately covered in this Guide.

A long term objective of the scholarship program is to develop character that will enhance not just the world of racing but the larger community as well in the scholar’s future years. Selection criteria are athletic performance, academic achievement, community service and need.

Applications come from multiple Association councils and we are able to make grants to roughly half the applicants.  In 2013, the Foundation made 19 grants totaling nearly $14000 with funds raised by the Foundation, from club and council partnerships, and proceeds from auctioned travel prizes.  These prizes are donated by continuing Association sponsors Whitefish Mountain Resort and Grouse in Montana, Schure Sports, Inc., the makers of Karbon brand ski clothing and Far West Racing Association.  Scholarship winners for the current year and past years are shown on the pages of FWSA.org.

Several scholarships are namesake awards.  These include the Erin Nicole from Skiyente, Frank App from Sierra Ski League Council and the Vern Sprock from the family. The scholar athletes holding these scholarships are, in order, Elyse Burandt from Schweitzer and Lila Lipanja from Diamond Peak.  The 2014 grant for the Vern Sprock scholarship will be made for the first time this year. 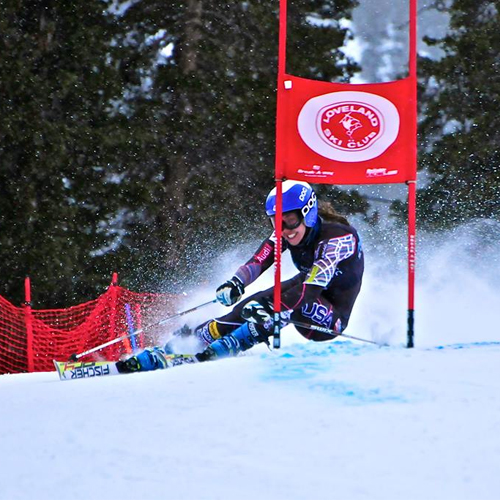 Lila Lipanja has been a FWSA scholar-athlete since 2009.  She was selected for the Development team of the US Ski Team in 2011. She continues to excel internationally in Super G, GS and slalom. 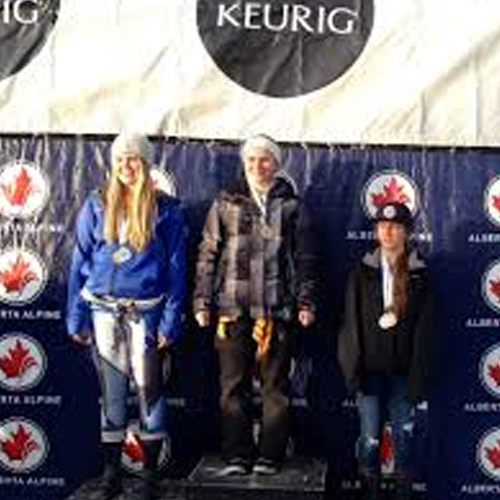 Elyse Brandt, 16, of Spokane achieved a podium finish (2nd) in the Keurig Cup

Elyse Brandt, 16, of Spokane achieved a podium finish (2nd) in the Keurig Cup at Kimberly BC last year.  She continues to improve her rankings in DH, super G and slalom.  She became a FWSA scholar-athlete in 2012.

Our fourth mission is to encourage education regarding winter sports and especially the preservation of this record through museums.  The major museum challenge in California and Nevada is the design and development of the Squaw Valley Olympic Museum and Winter Sports Heritage.  This project has passed through the Placer County and Forest Service approval process.  Designs are complete but construction has not begun.  Contact: Alan Christian.

Remember that ski clubs and club racing in leagues started in this region about 1860.  One of the functions of this museum will be to preserve this ands later snowsport history.  Included in the plans is a Ski and Snowboard Hall of Fame.  Some of this material, including that contributed by FWSA,   is in the Auburn Ski Club museum at Boreal Ridge.

The Association and Foundation received a jumping suit worn by a member of the team in the spring of 2013 by virtue of contributions to Women’s Ski Jumping.  Here is that suit, displayed by Lily Nava, of the Village News in Fallbrook, CA. It is autographed by all the jumpers and staff of WSJUSA and it is now on display at the ski library at Norco. 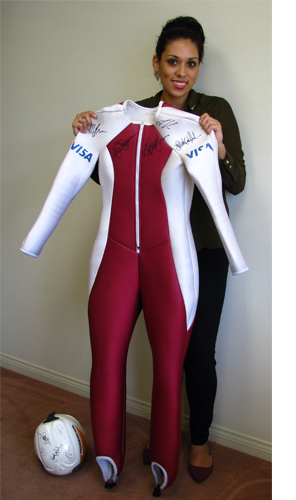 Ways to contribute include: using PayPal through our website.

The Far West Ski Foundation is a public benefit (501c3) corporation and your contributions – investments – in these passions are tax deductible. 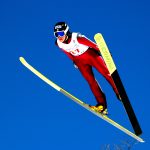 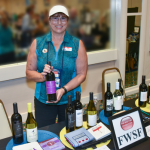