FWSF was formed in January 1964 by seven prominent California skiers to support the development of athletes for the Alpine skiing events in the Winter Olympics.  For the next 45 years, the Trustees continued to raise funds and make grants to support athletes, including Nordic, for international competition.  The revenue through the Foundation began to dwindle and other entities took up the cause of support.  The former Trustees intended to abandon the Foundation.  They offered to turn over the Foundation to a set of Trustees drawn from the ranks of FWSA committeemen and an initial set of new Trustees were elected in June 2009, committed to carrying out the historic missions.  Within months, the Articles of the Foundation were amended and restated for the addition of new modern missions.

Early on, the Trustees felt that in order to appeal to a broader audience, we had to create a scholarship program aimed at producing, not only top performing young athletes, but productive community citizens.  We also felt that a good ski foundation ought to recognize achievement in other areas of snowsports, remain interested in international competition and to provide resources for education in the values provided by the legacy of snowsports history. The Foundation modified its Articles to incorporate these further missions.

The primary mission of the Foundation is to raise funds for and provide for tax advantaged contributions, if needed, to support the FWSA Athletic Scholarship Program.  These funds come primarily from FWSA/FWRA organizations and committeepersons, but also from “outside” individual contributions.  For the 2014-2015 season, FWSF made 14 scholarship grants ranging from $500 to $1500, totaling $12300.  There were 6 California recipients, 6 Northwest, and 2 Intermountain. Notable among these grants are namesake awards Erin Nicole by Skiyente SC, Frank App by Sierra Council, and the Vern Sprock by the family of the late owner of Sierra Ski Ranch. Many ski organizations have established partnerships with the Athletic Scholarship program, including Los Angeles, Northwest, Sierra and San Diego Councils, Singles League, Far West Racing, and the following clubs: Bergfreunde, Mountain High, Castro Valley and Skiyente.  Contributions were also received in honor of Louie Buhler from Grindelwald SC and from the family of Mike Sanford.  Major commercial supporters include KARBON, Whitefish Mountain, and Grouse Mountain Lodge, together with the dedication of many volunteers, account for roughly half of the support to the scholarships for Alpine racers.

The second mission of the Foundation is to recognize and support the large body of disabled skiers and boarders.  Several Trustees and the Arizona Ski Council in 2010 launched the Fred Westlund Fund for wounded servicemen.  Fred Westlund, the father of Linda Westlund, landed at Normandy and fought through the Battle of the Bulge into Germany. We have made several modest grants to the Vail Veterans Program.  VVP conducts extraordinary programs both summer and winter.   In addition, to further enhance the value of on-snow rehabilitation an annual grant is made to a ski academy to support their programs for the disabled.  Grants have gone to Snowbasin SASEF and to Whitefish DREAM Adaptive in conjunction with our mini ski weeks.

Because of the support of organized snowsports and recognition of the tenacious dedication of the late Deedee Corradini, the Foundation has twice taken up the challenges from Women’s Ski Jumping USA and made several grants over the last 2 years totaling over $4500.  In one campaign, the Foundation and the Association provided matching contributions.  We had a part to play in the eventual participation of the American jumpers in the Sochi Winter Olympics in 2014.  In the recent final World Cup meet on the big hill in Oslo, a rehabilitated Sarah Hendrickson placed second, Jessica Jerome 11th, Nita Englund 23rd and Tara  Geraghty-Moats 28th.  This is a signal achievement for WSJUSA. In addition, WSJUSA sent two athletes to the World Junior Championships – one of whom is a direct result of the Fly Girls program started in summer 2014.  Fly Girls is analogous to the FWSA Athletic Scholarship Program for young athletes.  Some of the original language regarding training of international competitors in the 1964 Articles is retained in the restated Articles.

We are anticipating raising sufficient funds to make a modest annual grant (minimum 1 scholarship unit of $500) to a museum, for publications, or for ongoing research project in snowsports history and education.  This would be the first step to a more extensive program and would make the Foundation active in all its principal missions.

BREAKING NEWS! We plan to conduct this year a charity golf tournament and lead up to an even bigger tournament in 2016.  This will be under the leadership of Gloria Raminha. 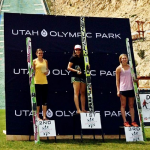